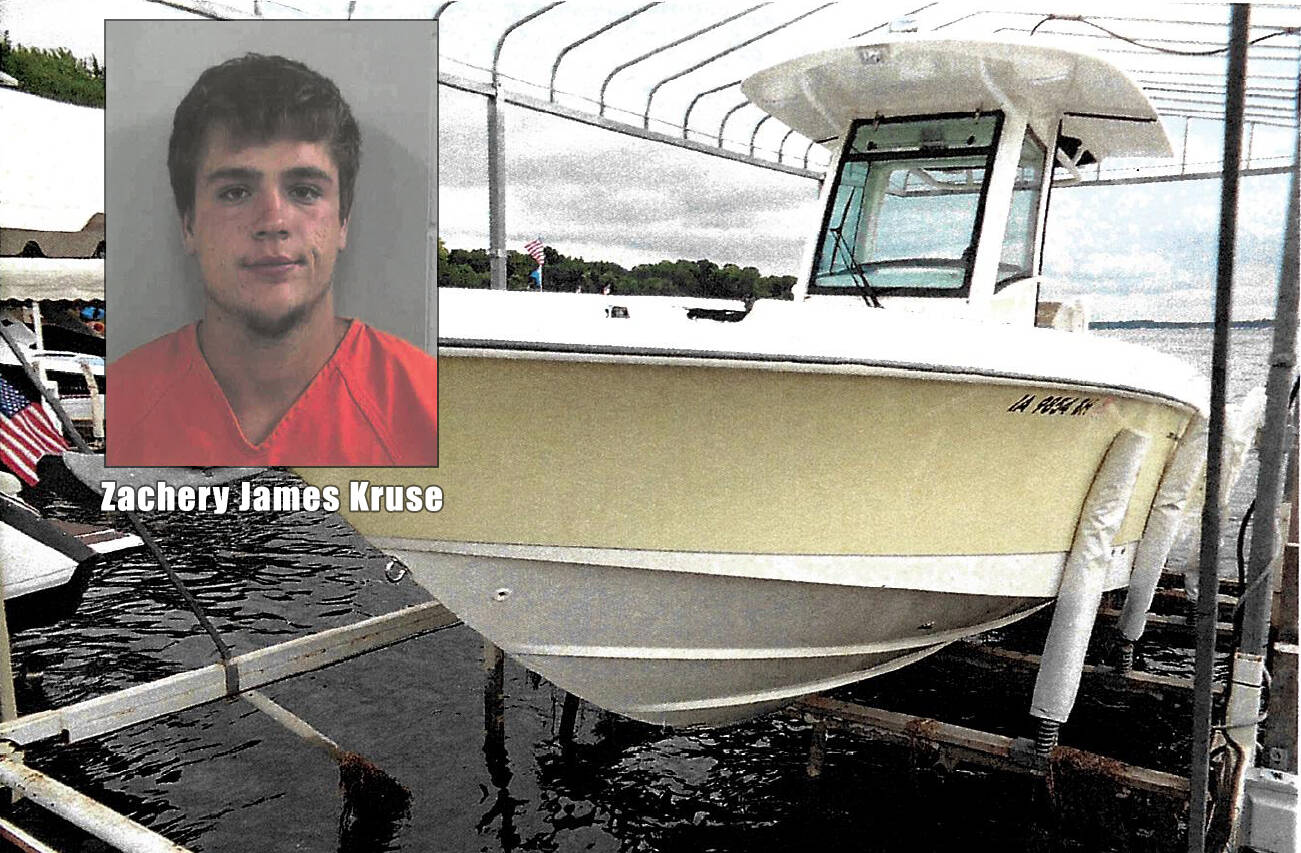 Zachery Kruse admitted to driving a 2010 Boston Whaler, pictured here as it appeared in the Iowa DNR's search warrant application, which was involved in a hit-and-run collision Aug. 4, 2020, on West Lake Okoboji.

A Spirit Lake man has been sentenced for his part in seriously injuring of a fellow boater in August of 2020.

A judge had previously rejected a plea deal 22-year-old Zachery James Kruse of Spirit Lake reached with prosecutors, "based on information contained in the court file," and the young man withdrew his plea. Kruse entered a new guilty plea in mid-September, and a sentencing decision was filed by the judge Oct. 25. The decision listed a two-year jail sentence, but Kruse will be given the chance to pay a $855 fine and serve a one-year period of probation — 30 days of which are to be served in jail. Should the 22-year-old violate the terms of probation, he could be required to serve his full two-year jail sentence, according to Dickinson County Attorney Amy Zenor.

The Dickinson County Sheriff's Office received a 911 call around 10:30 p.m. Aug. 4, 2020, from Vaughn Aaron Wickham of Spirit Lake. The 52-year-old's 2008 Chaparral had been struck in the rear by another boat while on West Lake Okoboji near Manhattan Beach. Court filings described Wickham as having a large laceration on the left side of his head as well as injuries to his right eye, wrists and back. Wickham has more recently filed a civil claim against Kruse and 47-year-old Ryan Michael Lake, whom the filing identifies as Kruse's stepfather. Wickham claims in his petition that he was heading north toward home the night of the collision when the vessel Kruse was operating struck his boat, "in such a manner as to cause it to collide with and ramp onto the top of (the) plaintiff's boat." Court filings from the state's case said a witness staying at the Village West Resort told authorities he saw a boat initially head east after the collision and stop near Colcord Point before heading north and out of sight.

Authorities put out a call for the public's help in locating the boat which struck Vaughn. A particular vessel — later identified as a 2010 Boston Whaler belonging to Lake — caught the attention of officers with the Iowa Department of Natural Resources during a routine patrol two days after the incident. The boat showed damaged consistent with the collision and was resting in the hoist of a residence in the 15000 block of Weather End Drive in Spirit Lake, which investigators said belonged to Lake. Court filings said the DNR officers saw fresh damage to the bow and blue paint consistent with that of Vaughn's boat. They applied for a search warrant the same day. The application for the warrant said a neighbor told investigators she had heard a woman crying the night of the collision around the time the boat was docking.

"The neighbor stated that it sounded like the boat crashed into something when coming into the hoist, like they didn't know how to drive the boat," the application said. "She stated that this occurred between 10:45 p.m. and 11 p.m. on Aug. 4."

Conservation officers also interviewed witnesses near the dock who were able to provide security video of the Boston Whaler returning to the residential dock around that time. Investigators obtained footage of the boat's occupants getting into a vehicle at a nearby residence and leaving — Wickham's petition specified the home belonged to Lake. Authorities seized the boat at about 5:47 p.m. that day and took it to a DNR storage facility. Kruse turned himself in shortly after the boat was seized, and conservation officers interviewed him at the local sheriff's office.

"Zachery admitted to officers that he was operating the 2010 Boston Whaler and struck the vessel of Vaughn Wickham on West Lake Okoboji," court filings said. "Zachery also admitted that he left the scene after the collision and did not render aid to Vaughn."

The judge's Oct. 25 decision said Kruse is to report for his jail sentence 45 days after the ruling was filed — putting the date in early December. Wickham has called for a jury trial in his separate civil case. He claims Kruse's actions directly caused physical pain, mental suffering and loss of function as well as various expenses related to hospital care, therapy and other needs. A trial date has yet to be set in that case, but a trial scheduling conference is expected later this month.