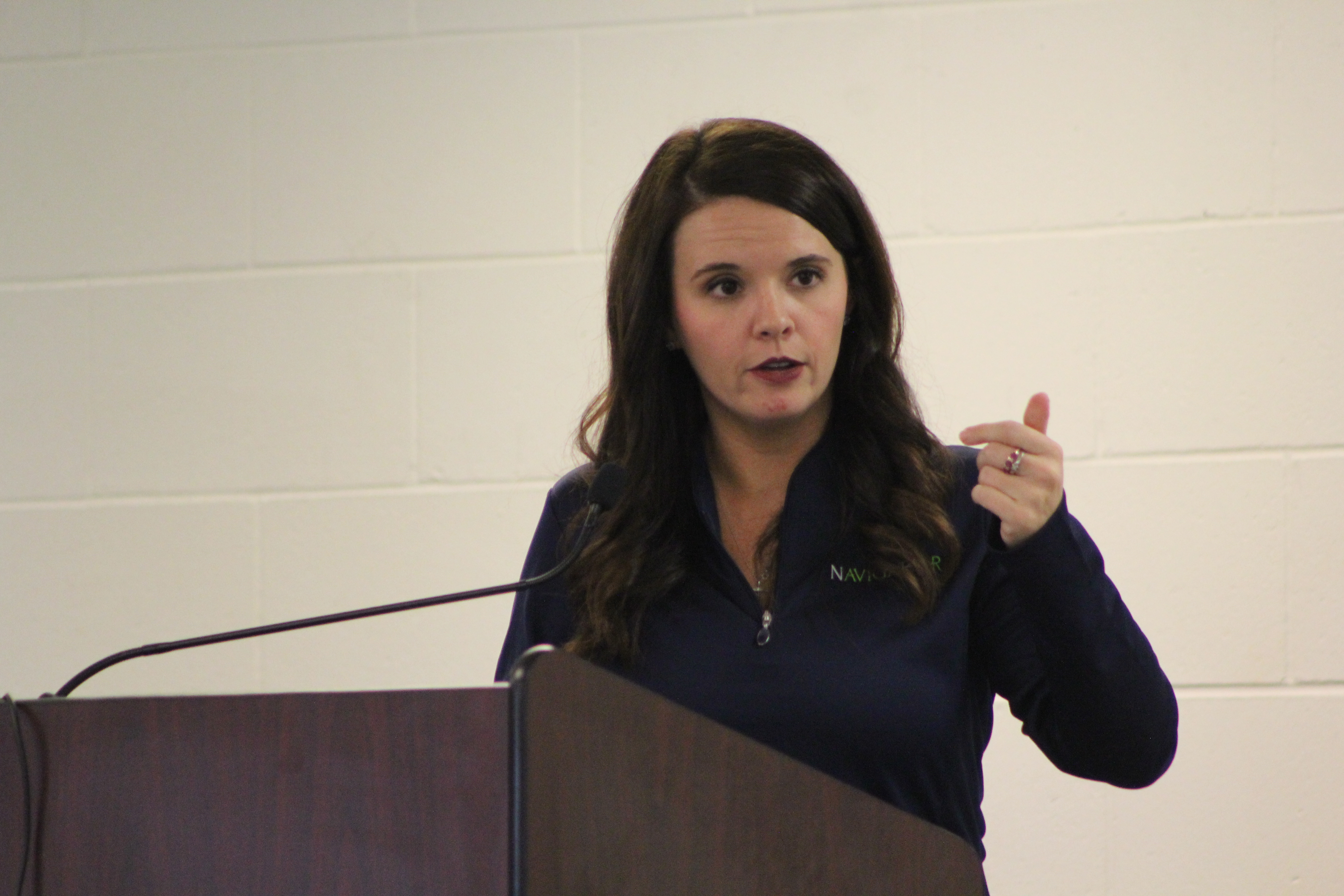 The informational meeting had been proposed to take place in the Milford Community Building but was later changed to the Expo Building in Spirit Lake — the same venue where officials Summit Carbon Solutions had explained plans for a CO2 pipeline called the Midwest Carbon Express.

Come Thursday, officials with Navigator CO2 Ventures were sharing specifics about their proposed pipeline — the Heartland Greenway. Officials said the two projects are independent and are not currently planned to connect. Navigator's Vice President of Government and Public Affairs Elizabeth Burns-Thompson called Summit a competitor but, if both proposed projects are ultimately approved by state officials, the two pipelines would cross northwest of Terril.

"With any infrastructure of magnitude, just like the other energy infrastructures — some of the natural gas, water — right now they're two independent systems," Steve Lee, Navigator's executive vice president of engineering, said. "However, as this industry and these networks develop, there's always an opportunity when you can have interconnects between the two systems."

PURPOSE OF THE PIPELINES

The two pipelines both aim to carry liquified carbon dioxide captured from various production facilities — such as Iowa's ethanol plants — to sequestration wells deep underground in neighboring states. Iowa lacks the geography necessary to store carbon in that way, according to both companies.

Navigator officials said the $3 billion Heartland Greenway project is expected to be funded through Navigator's parent-partner BlackRock Global Energy & Power Infrastructure Fund. Burns-Thompson said about 20 ethanol and fertilizer plants are already expected to join the pipeline, including about eight Valero facilities, which fall under the same family of companies as BlackRock and Navigator.

"These particular facilities — the ethanol and fertilizer facilities — have some of the purest quality CO2 as part of their processes and an abundance of it," Burns-Thompson said. "That's really what makes them great partners for projects like this."

Burns-Thompson said the Heartland Greenway would call for about 1,300 miles of pipeline in a total of five states. Around 900 miles of the project would be laid in Iowa — crossing 36 of Iowa's 99 counties.

Locally, Navigators's proposed pipeline would skirt across southern Dickinson County, entering from Clay County north of Fostoria and heading north of Terril before crossing into Emmet County north of County Road A34.

The pipeline itself would be buried at least 5 feet underground and pressurized at a minimum of 1,200 psi. The pipe would range from 6 inches in diameter to 24 inches in diameter throughout the project, but officials said plans in Dickinson County largely call for 8-inch pipe. Several booster stations would be required along the pipeline in order to maintain the minimum pressure — which holds the normally gaseous CO2 in a liquid state — but no such stations are currently planned for Dickinson County.Navigator's pipeline would carry its carbon to a site near Taylorville, Illinois, for underground storage.

The company intends to apply for its permits from the Iowa Utilities Board in 2022, with the hope of construction beginning in early 2024 and operations getting underway later that year or in early 2025.

While the two pipelines are similar in function, their financial models differ.

Summit's pipeline is expected to be partially funded through federal tax credits put in place during the early years of the Trump administration. Burns-Taylor said Navigator plans to charge its partner facilities a set rate per ton of carbon loaded onto the Heartland Greenway. She said the facilities are able to offset their own expenses by taking advantage of the federal tax incentives themselves.

Some in the audience questioned tax-payer funds being used to support ethanol facilities in such a way. But Kraig Kruger, plant manager at the Valero ethanol plant in Hartley, said facilities like his may need to connect to a carbon pipeline in order to stay in business long-term.

About 57 percent of Iowa's corn crop goes into ethanol production and creates nearly 27 percent of the country's ethanol fuel, according to the Iowa Corn Grower's Association. Iowa's ethanol industry demands more than 1 million bushels of corn annually, according to the Iowa Renewable Fuels Association, and the state produced 3.7 billion gallons of ethanol in 2020 — a decrease compared to 2019.

The Hartley plant grinds about 140,000 bushels of corn each day, Kruger said, for a yearly total of about 50 million bushels — enough corn kernels to fill more than 700 Olympic swimming pools.

The plant manager said the country as a whole appears to be shifting toward low carbon fuels. He noted the state of California accounts for about 10 percent of the country's fuel demand, and the Golden State also has a low-carbon fuel standard — which he explained means ethanol shipped and sold in California must have a low enough carbon intensity score. He noted Iowa's renewable fuel producers are trying to keep up with a changing market, but must transport their carbon with no suitable sequestration sites in the state.

"If we aren't able to hook onto this pipeline, we are not able to sell any ethanol to California — Washington state is going that way, out east is going that way, and it's something that's definitely coming down the pipeline," Kruger said. "It's obviously something the whole country is going toward. The benefit of this pipeline is it allows us to stay competitive and continue to use corn."

Safety was more of a concern than economics for some in the audience.

Carbon dioxide isn't flammable, but Lee said it's classified as a hazardous material because it can displace oxygen, making it difficult or even impossible to breath in high enough concentrations. He said Navigator has not had an unplanned release since the company was founded in 2012.

Members of the Iowa chapter of the Sierra Club previously pointed to a separate CO2 pipeline which ruptured in February of 2020 near the city of Satartia, Mississippi, causing many to lose consciousness and become ill. Lee was familiar with the incident and said record, heavy rains caused a mudslide there which severed a 20-inch segment of the pipeline.

Lee said the industry has learned from what happened near Satartia, and plans call for pipes which bend rather than break to be buried deeper to escape the effect of any mudslides. He also noted the Heartland Greenway won't be carrying hydrogen sulfide with its CO2 as the Satartia pipeline was. Navigator officials told Thursday's audience that the company's proposed landowner agreements only allow the pipeline to carry CO2.

"Nothing else can move through that line without amending or having a new easement on top of that," Monica Howard, Navigator's environmental and regulatory senior director, said. "The petitions that we intend to submit to the IUB will be specific for that to flow through the systems, so we would need a totally separate permit to flow anything else through the system."

Navigator also said the pipeline will have shutoff valves spaced periodically along it, and round-the-clock monitoring of pressure, temperature and flow. Lee said the spacing for the valves will vary depending on risk factors along any stretch of the project, but he said they can be closed in a matter of minutes if not seconds.

Concerns still lingered for some, including Dickinson County Board of Supervisors Chairman Bill Leupold.

"As a supervisor, my number one responsibility is to the safety of my citizens, and since this isn't like a natural gas line, like electricity that you can use, why would I want this in my county?" Leupold asked the Navigator team.

The project's permitting process is largely handled at the state and federal levels, and members of the Dickinson County Board of Supervisors have at several junctures expressed their frustration at the lack of local control when it comes to the proposed pipelines. Some of the local supervisors said conversations with their counterparts elsewhere in the region seem to indicate most are opposed to the pipeline, not because of its purpose, but because it could potentially make use of eminent domain.

The county supervisors plan to hold further discussion next week on a document written by the Iowa Drainage District Association, which outlines requirements to protect agricultural drainage tile near buried utilities — a concern some affected landowners expressed Thursday.

But the question of how to enact the requirements remained as of Tuesday's board meeting.

Passing a resolution would likely not give the county the ability to enforce the specifics, according to Assistant Dickinson County Attorney Steve Goodlow. He said passing it as an ordinance potentially could, but he noted there would still be the matter of how the county might go about enforcing its decision. Some members of the board said they would support the matter as an ordinance.

"I hate to do things that don't have teeth in them," Leupold said. "It's not a bad guideline to have around — 'This is what we would like' — but if I can't enforce it, why pass it?"

Supervisor Jeff Thee was also hesitant to pass what he called previous feel-good resolutions, citing a past example the board recently turned down for the same reason.

Goodlow said he will look further into legal specifics of a possible ordinance ahead of next week's board meeting. The item is expected to be on the Dec. 14 agenda for further discussion and possible action.

In addition to dozens of in-person meetings, the Iowa Utilities Board plans to host a virtual information session regarding the Heartland Greenway project on Jan. 19. Interested parties may sign up for the virtual session through iub.iowa.gov.

The public may submit official written comment for the IUB to consider during its review process — only written comment will be considered. Comments and questions may be submitted online at iub.iowa.gov/online-services/open-docket-comment-form or by mailing comment to the IUB at 1375 E. Court Ave., Des Moines, IA 50319. Those needing assistance in filing their comments electronically may call the IUB at 515-725-7337. Representatives of the IUB indicated state officials may — and have — required other pipeline companies to answer some of the public's written questions.

Comments and questions should also include the docket number for the project to which they are referring. The Navigator Heartland Greenway project is docket HLP-2021-0003.