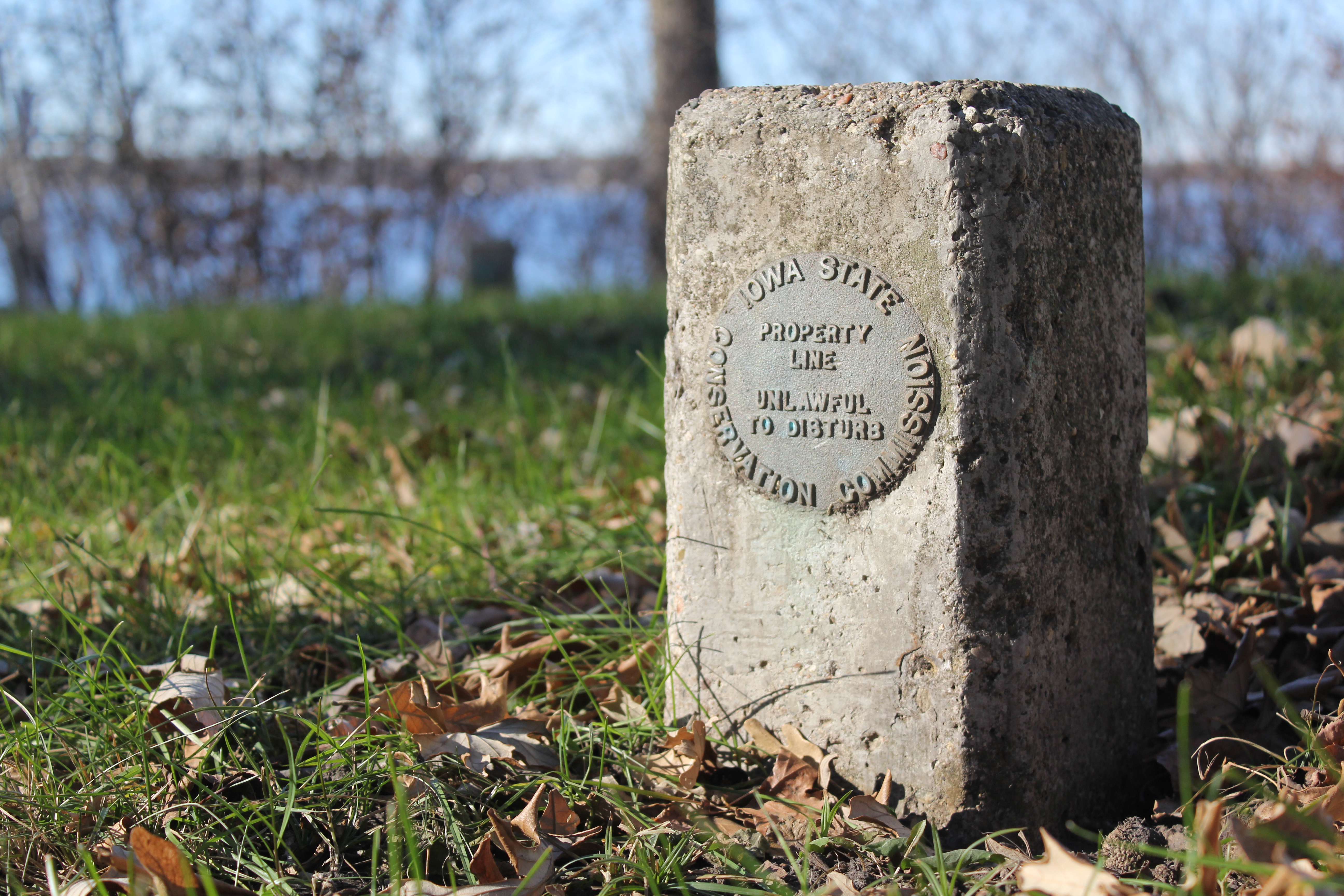 Property markers were placed in the Pillsbury Point neighborhood by the Iowa State Conservation Commission. Many of the markers remain today. (Photo by Seth Boyes)

Residents in the area of Pillsbury Point on West Lake Okoboji have filed a court petition against the city of Arnolds Park and the state of Iowa. The group says the city plans to improve a nearby pathway but claims the city has abandoned rights to it. Both the city and the state have filed for the case to be dismissed.

A group of almost 40 plaintiffs filed the petition in late September, saying the Iowa Department of Natural Resources and the city of Arnolds Park entered into a management agreement for the maintenance of 3.86 acres of state-owned property in the Pillsbury Point area. Lakeview Boulevard runs along the point's shoreline between residential lots and the DNR's land — at least one stretch of the boulevard is a dirt trail. The path eventually aligns with lakeside cement walkways in the rear of several homes on Elm Drive. The connection forms a quarter-mile path from the state-owned Pillsbury Point Park to Historic Arnolds Park Amusement Park.

"The city of Arnolds Park and its easement for any path or walkway has long since been abandoned," the group's petition argues. "The pathway has not been marked or maintained and has been adversely possessed by plaintiff lot owners."

The city's group of defense attorneys noted in later court filings that "Iowa law does not even permit adverse possession or prescriptive easement for a walkway."

The boulevard in question features a few tokens of history. A number of property markers placed by the Iowa State Conservation Commission still stand along the pathway and public park. The group's petition said Pillsbury Point was declared a historic archaeological park in 1940 and a state preserve six years before that — the group also believes the ground may potentially hold native artifacts. The shoreline trail features a number of stone benches built by the Civilian Conservation Corps in 1934. Arnolds Park Mayor Jim Hussong previously said the path had been somewhat popular in past eras among young people who would sit by the lakeshore after spending time at the amusement park or Roof Garden Ballroom.

The city of Arnolds Park poured a new segment of cement sidewalk along the Pillsbury Point shoreline in the summer of 2018 as part of a larger sidewalk repair near the state park. Hussong said at that time the older portions of the walkways had become a tripping hazard.

He also said there was a degree of apprehension among some residents on the point who felt the work would increase foot traffic in their proverbial backyards. The mayor said during the 2018 project that a land swap with the DNR  was a potential option to keep future sidewalks from abutting nearby homes.

Frank Rickerl, district supervisor with the Iowa DNR, said Tuesday such a land swap didn't ultimately take place. Instead, he said the DNR and the city formed an agreement in approximately 2018, allowing the city to pour a concrete path on DNR property and continue the walkway toward the point's east side. He said the agreement also allows the city to care for and maintain the path.

Some recent filings from the home owners indicated the proposed work on Pillsbury Point may be carried out by the local beautification group Imagine Iowa Great Lakes. The nonprofit had released a statement in March, outlining plans for "cleaning up the overgrown brush and invasive species along Pillsbury Point," and improving the walkability of the shoreline's path as well as repairing and preserving the historic benches.

Residents in the Pillsbury Point area have held easements on the point's steep, state-owned banks for many years, according to the filings. It said the residents install docks and hoists as well as stairways to access the docks. The private property owners have "expended significant money for stairs to access their docks," the petition said, noting the hoists "hold boats of varying value."

The group claimed "discussions have occurred suggesting removal of stairs, a modification of docks, hoists and construction of a boardwalk as well as major defoliation, all of which would be a grave financial hardship and damage to the plaintiffs and an aesthetic mistake for the Iowa Great Lakes."

A maintenance agreement entered into court record by the group's attorney says no vegetation may be removed — save for that deemed hazardous to the public — and no natural features on the state property may be disturbed without written permission from the DNR. The landowners' petition went on to argue that any action the city might take to move forward with the project before a court decision would "establish a negative precedent for property adjoining West Lake Okoboji" and amount to "taking without due process of law."

Iowa Attorney General Tom Miller claims the state, for its part, is immune from the lawsuit in this instance and said it should be dismissed. The group of homeowners are represented by attorney Steve Avery, who argued the state gave up its immunity to the lawsuit when it entered into an agreement with the city of Arnolds Park.

Miller also argued the landowners did not present the court with an issue that can be legally remedied, and he said the group's allegations against the state are speculative.

"(The) landowners do not allege that they have lost or are losing their dock permits, or that the stairs have been or are being removed," Miller wrote. "Instead, landowners' petition is silent on any actual or imminent injury, leaving the court with a request for nothing more than an advisory opinion on how the state should maintain Pillsbury Point. And Iowa courts do not issue advisory opinions. Therefore the case should be dismissed."

Similarly, the city's defense attorneys said, though the homeowners claim the city plans take action on the pathway, the group has not filed any proper action to stop it from doing so — such as a temporary injunction.

"A party cannot file a lawsuit for future damages in an attempt to scare their opponent into withholding action," the city's attorneys wrote.
A trial scheduling conference in the case has been tentatively set for Dec. 2.