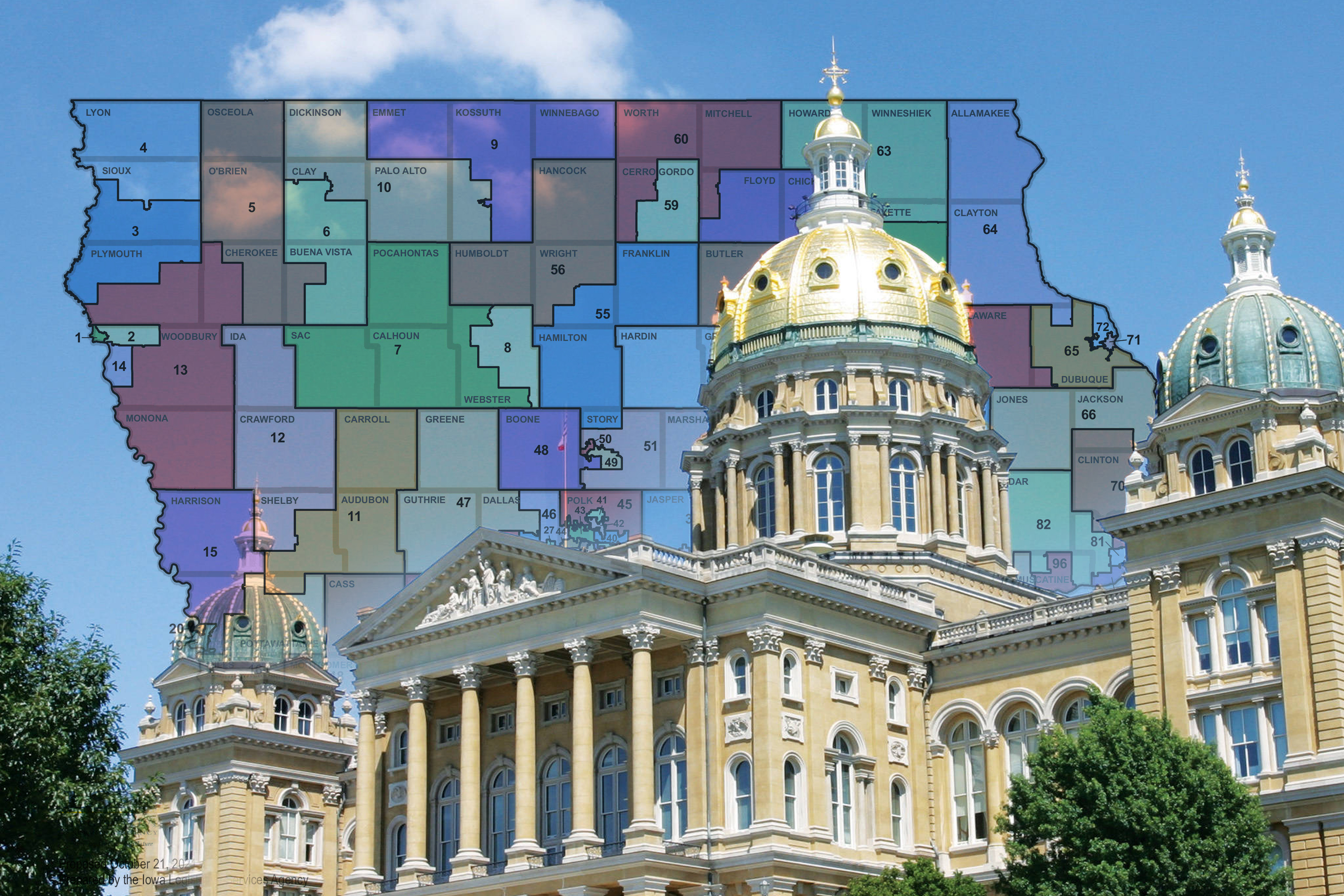 Iowa lawmakers met once again in the Capitol building Thursday and approved the second proposed draft of the state's new legislative districts.

The Iowa Senate approved the maps by a 48-1 vote and the Iowa House of Representatives soon followed with a vote of 93-2 in favor. Each member of Dickinson County's state delegation voted in favor of the redrawn maps and, to the surprise of some, State Sen. Zach Whiting of Spirit Lake announced that same night that he plans to step down from his position. Whiting concluded his time in the state legislature at noon Oct. 30 and will be taking a position with the Texas Public Policy Foundation. The non-profit describes itself as a research institute with a mission "to promote and defend liberty, personal responsibility and free enterprise in Texas and the nation by educating and affecting policymakers and the Texas public policy debate with academically sound research and outreach."

Whiting spoke from the Senate floor Thursday night, joking that he was thrilled to make a retirement speech at the age of 33 but was disappointed it didn't come about because of a sizable lottery payout.

"This all happened very suddenly, but it was an opportunity that I just professionally couldn't pass up," Whiting said from the Senate floor.

State Sen. Roby Smith of Scott County told his fellow senators Whiting was not only honest but had always done his research and worked hard on the bills he was given.

"Iowa loses a good senator and a good family," Smith told Whiting on the Senate floor. "Texas will gain a good family. Your three years here were too short in the Senate. God speed and blessings on your new adventure."

Whiting began serving in the Iowa Senate in 2019 after running unopposed on the Republican ticket. Whiting had previously taken a run at the District 6 seat — currently Iowa's District 1 — in the Iowa House in 2010, but lost the Republican primary race to former State Rep. Jeff Smith by about 55 votes — Whiting was 22-years-old at the time. He eventually returned to politics after earning his law degree, working in Washington D.C. and later returning to northwest Iowa.

Whiting said Thursday that the most important title he's held through his career is that of husband and father.

"In the midst of all this, that kind of gets put to the test, and I decided for myself and my family, that's the title I want to carry into the future," Whiting said, thanking his family for the sacrifices they made during his term.

Whiting also thanked his constituents, colleagues and staff members for their support, and said he's excited to continue working toward conservative policies in his next role.

Staff at the Dickinson County Auditor's Office had already reached out to the Iowa Secretary of State's Office for guidance the morning after Whiting's announcement. A special election will need to be held to fill Whiting's upcoming vacancy. Iowa law requires the governor order a special election no more than five days after the vacancy exists, but 40 days notice must also be given ahead of the election. State Rep. Megan Jones of Sioux Rapids indicated the election could potentially take place sometime in December — staff at the local auditor's office hope for a bit more time to prepare.

With Whiting's announcement coming on the heels of the approved redistricting maps, the selection of a new state senator may have some twists and turns.

Jones indicated any candidates seeking to fill Whiting's seat will likely have to reside within the current District 1 boundaries but, once the newly approved district lines take effect in 2022, the successful candidate could potentially face challengers in the June primary as well as the November general election.

Currently, Whiting's Senate District 1 encompasses Dickinson, Clay, Palo Alto Osceola and Lyon Counties. After the expected redistricting, Dickinson County would be part of a new District 5, which would give up Lyon and Osceola as well as southern and central portions of Clay County, while gaining Emmet, Kossuth and Winnebago Counties. Jones pointed out Whiting's current district crosses three of the expected 2022 districts, and the home address of Whiting's successor may impact which of the new district seats they may pursue after the changes take effect.

A pair of Lakes Area candidates plan to run for Whiting's seat. Barbara Clayton of Orleans and Dave Rowley of Spirit Lake both declared Monday they intend to be on the ballot once a date is set by the governor.

The Iowa Senate had voted against approving the first proposed maps during an Oct. 5 special session. State Rep. John Wills of Spirit Lake said he believes, had the vote come to the House at that time, his colleagues likely would have voted to approve the draft, rather than risk a less desirable second draft and push legislators closer to a Dec. 1 deadline. The non-partisan Legislative Services Agency, which is responsible for drawing the maps, was able to submit a second draft in relatively short order after the Oct. 5 vote, and Wills noted some improvements.

"I think a lot of the concerns that the Senate had when they rejected that first map have been responded to, and the Legislative Services Agency has done a pretty good job of trying to respond in a good way to those concerns," Wills said. "The big one was the Congressional seats. (U.S. Rep.) Randy Feenstra, on the first map, was 45 counties. I believe he is down to 36 now. So that's a big step forward as far as compactness."

Feenstra, who transitioned from the Iowa legislature to the U.S. House after the 2020 election, released a statement Friday, applauding Iowa's Republican lawmakers for "passing a fair map that upholds Iowa's gold standard redistricting process." Wills said some political pundits have criticized the state's second swing at redistricting and called it an attempt at gerrymandering the system to benefit Republicans for the next decade — the redistricting process takes place every 10 years to factor for population changes and keep each district to roughly 30,000 people. However, Wills pointed out Republicans actually lost some district-level support for House candidates in the second draft.

"In the first set of maps in the House, Donald Trump won 63 out of the 100 seats that would have been created — which was really good, that meant Republicans would have potentially won 63. With the second map, Donald Trump won 59 of those seats, so we actually went backwards," Wills said. "We didn't get as good a map as far as politics. We followed the process, which was a non-political process. We made sure that the maps were correct according to the law, and we made sure that everything was upstanding, and it didn't really take the political part of it into consideration."

The first set of House maps would also have divided Dickinson County, putting southern and eastern portions in the same Iowa House district as neighboring Emmet County, while the northern and western portions would have shared a district with Osceola County. However, the plan approved Thursday night will keep Dickinson County whole on the Iowa House's maps. Dickinson and Palo Alto County will join approximately the northern third of Clay County as well as portions of southwestern Kossuth County in forming the new House District 10. Wills noted the new plan will create two open seats to the west in what will be House Districts 4 and 5.

Jones' current district extends from Clay County into southern Dickinson County, but under the new maps, Jones and fellow State Rep. Gary Worthan of Buena Vista County would reside in the same district — which will be District 6. Worthan told reporters at the Storm Lake-Pilot Tribune on Friday that he plans to step away from the legislature after completing his term in 2022. The proposed district would encompass a majority of Clay County — including the city of Spencer — and portions of Buena Vista County, such as Sioux Rapids and Storm Lake. Jones said many Iowa voters may feel a degree of discomfort and confusion with all the expected changes to their respective districts. However, she's sure Iowans will adjust. She herself had concerns about splitting Clay County between two House districts, but she said she's come to see some advantages to it.

"I think the huge benefit of having that situation in Clay County is that we would have four members in the legislature representing Clay County," Jones said. "We'll have two members of the House — the north quarter and the southern three-quarters — and then we'll have two Senate members too. I'm going to see this as an opportunity."

Jones went on to say she believes most Iowans are glad the process is finished, rather than the process dragging on through appeals and other measures as sometimes happens in other states.

"Iowa has such a clean process and is the gold-standard in the nation, and other states should be looking to us to copy us from what we do," Jones said. "People are just glad to have it done."

Iowa Gov. Kim Reynolds said in a statement Thursday the legislature's approval of the maps was encouraging.

"I am confident in how the process played out—just as the law intended —  and I believe these new districts will fairly and accurately represent the citizens of Iowa for the next decade," Reynolds said. 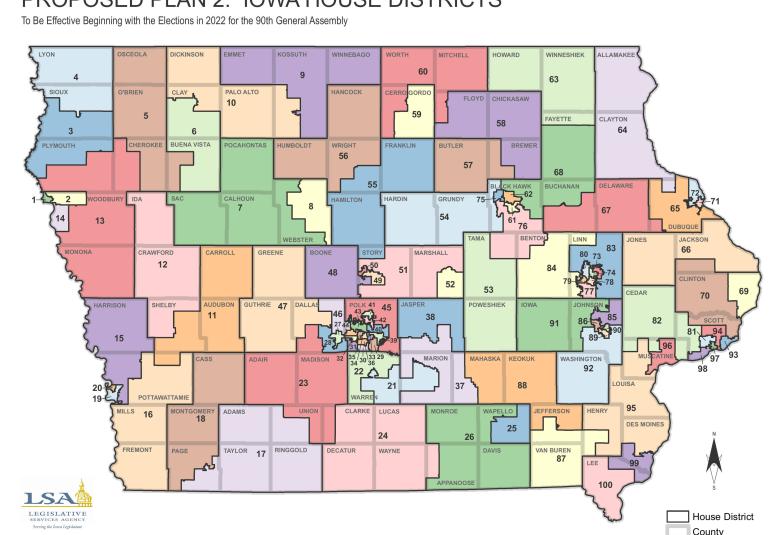 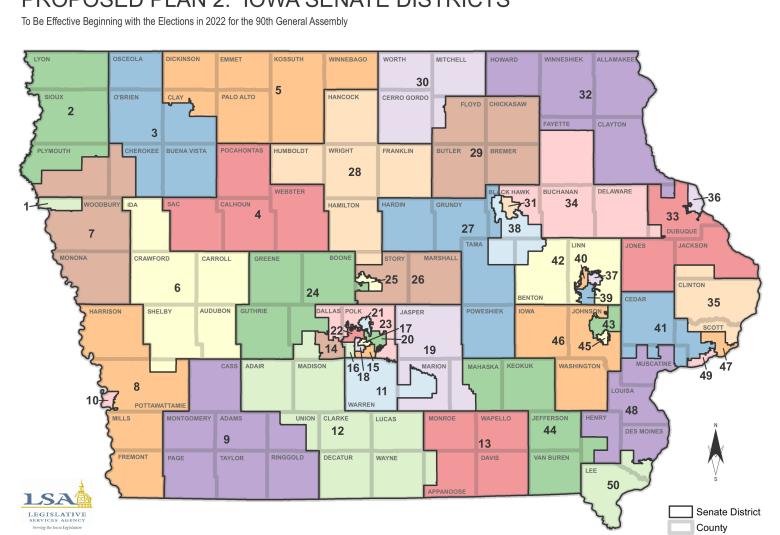 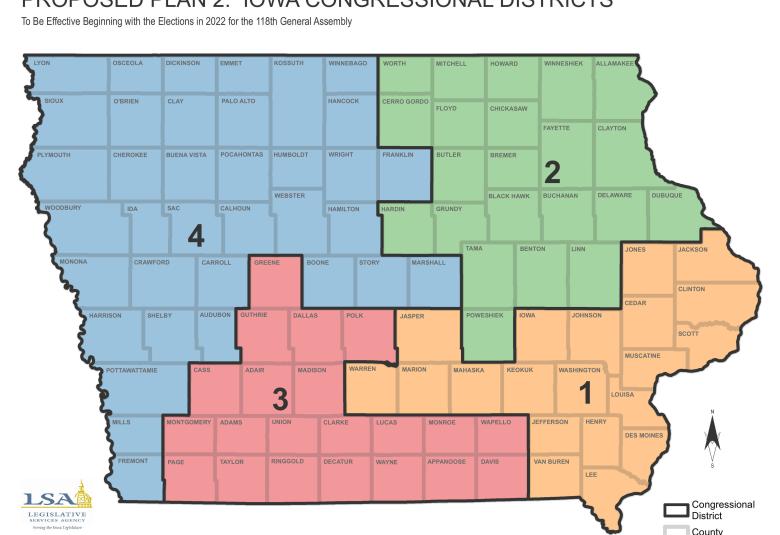