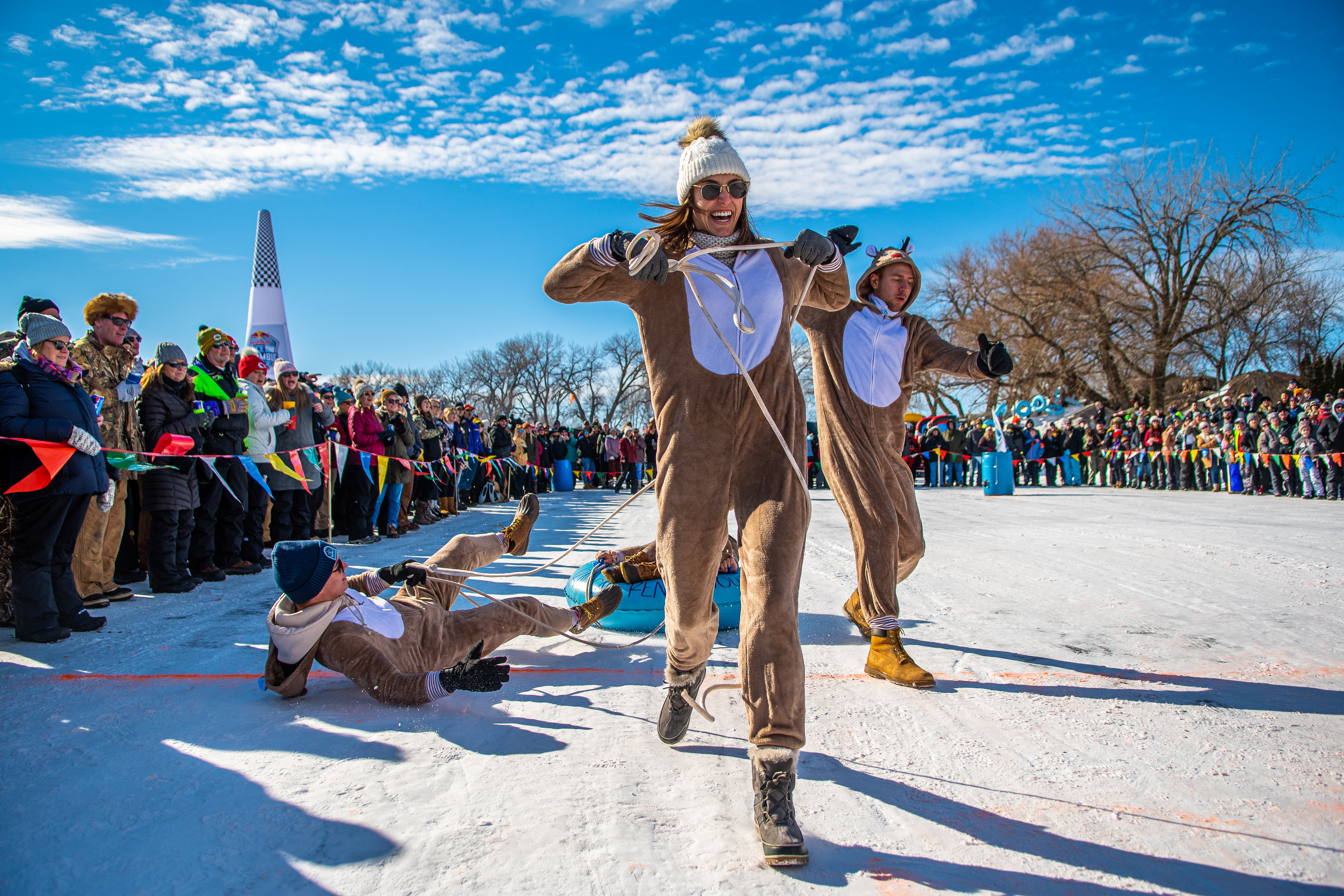 Competitors and spectators have been heading onto the frozen surface of the local lakes for more than 40 years to take part in the annual University of Okoboji Winter Games.

This year's games will be held Jan. 26-29, and organizers are preparing for a few new events as well as the return of some recent favorites and a number of enduring weekend staples. The Winter Games has been known to draw around 30,000 people to the Lakes Area each year from about 20 states and even a few different countries. The influx of people not only raises local moral during the winter months but boosts business for many locations which heavy rely on summer traffic.

"Our area thrives on three months out of the year, so for this one weekend to come up and really give everyone a shot in the arm or a boost to get through the winter and look forward to the spring and summer time is really helpful," said Kiley Zankowski, director of marketing and events at the Iowa Great Lakes Area Chamber of Commerce. "It's also really nostalgic and fun, because people can make memories and traditions with their families, but they can also come and enjoy some of their favorite restaurants and shops that maybe aren't open all year but open up specifically for this weekend."

Chamber officials are again keeping a close eye on ice conditions ahead of the Winter Games. Snowfall has been fairly regular since December, and the Iowa Department of Natural Resources reported 15-plus inches of ice on most area lakes — Spirit Lake having 17-plus in most places, the DNR said. But a good covering of snow can be just as crucial to a successful winter games as thick ice, according to Zankowski. She noted snow will be deeper during the 2023 games than it has been for several years, and she said that typically attracts more snowmobile and ATV traffic — which in turn helps support more of the businesses which open their doors during Winter Games.

Getting in the games

The annual lineup will once again start with the local pre-game party at Parks Marina on East Lake Okoboji.

The fun is slated to begin at 5 p.m. Thursday, Jan. 26, and this year's Winter Games Cheerleaders are expected to make an appearance. An hour later, the 10th annual Battle of the Bartenders charity event will start at the marina. The competitors with the most tips win the yearly competition, and proceeds are then donated to the bartenders' favorite charity. West O Beer in Milford will also be hosting its Trivia in the Taproom starting at 7 p.m. that night.

The annual Winter Games Chili Cookoff will take place from 5-7 p.m. Friday in the Dickinson County Expo Building. Competitors will have at least 20 gallons of their tasty recipes ready for chilly visitors looking for something to warm them up. Each year's competition carries a theme to guide contestants as they decorate their booths for the event — this year's theme is holidays. Prizes will be awarded for Best Overall Chili, Best Nonprofit and Best Booth, and winners will be announced Saturday night during the Burning of the Greens and Fireworks Extravaganza in Arnolds Park.

Those looking for some physical activity Saturday will have plenty to chose from. The day's 5K Fun Run will register runners from 8-8:45 a.m. at the Majestic Pavilion in Arnolds Park, with the run beginning at 9 a.m. Flag football teams will take to the ice near Parks Marina between 8 a.m. and 5 p.m. and batters will take their mark during the snow softball tournament from 8 a.m. to 5 p.m. at The Ritz in Arnolds Park. A crowd is also sure to gather for the annual broomball tournament from 8 a.m. to 5 p.m. in Smiths Bay — broomball is one of the weekend's most iconic competitions, and the hockey-esque game has been part of the winter lineup since the inaugural games in 1981. Those looking for something less high-impact may also consider a "snowga" session with Janine and Yoga Okoboji. The outdoor yoga session is scheduled from 8 a.m. to 9 a.m. near the Berkley Bedell State Pier in Arnolds Park.

The human foosball tournament, a competition which was added during the 40th annual U of O Winter Games, will begin at 9 a.m. Saturday. Teams take their places inside a full-scale version of the well-known table game — players slide from side to side while gripping a metal rail as they try to pass a soccer ball into the opposing goal. Perhaps in contrast, games of mega pong will be getting underway a the Okoboji Store at noon Saturday, after a 10 a.m. registration. The weekend's Stumps Tournament, which made its Winter Games debut in 2020, will begin at 10:30 a.m. at West O Beer in Milford, with registration opening a half-hour beforehand. Players attempt to hammer their opponents' nails into a large tree stump before the same is done to their own nail. Players must flip the hammer end over end at least once and catch it before attempting a single strike on an opponent's nail, but players can earn extra strikes by performing more difficult flips — under a leg or behind their back. Not to be outdone when it comes to tool-themed competition, The Throwing Post will host a 10 for $10 axe throwing tournament from 9 a.m. to 2 p.m. that day.

Hot laps in the Red Bull Ice Scramble are scheduled to begin at 10 a.m. Saturday. The side-by-side rally racers first set out across the frozen surface of East Lake Okoboji during last year's Winter Games, and officials with Red Bull Energy Drink decided to return again for this year's race circuit. The Ice Scramble is one of only eight races in Red Bull's 2023 Scramble circuit and one of only two expected to take place in the Midwest — the Red Bull Snow Scramble near Copemish, Michigan, will be held three weeks after the Okoboji race.

And, the savory scent of chili will be replaced by the sweet smell of sugar inside the Dickinson County Expo Building as the Chocolate Classic and Galleria takes place from 1-3 p.m. Saturday. Visitors will purchase tickets as they enter the exhibit space and then vote for their favorite confections. Vendors earn 50 cents per $1 ticket redeemed for their decadent creations. Organizers expect around 1,200 visitors during the event.

Meanwhile, registration for the annual Polar Plunge will be taking place from 1:30-3 p.m. at the Queen II ticket booth near Berkley Bedell State Pier in Arnolds Park, with the plunge itself beginning at 3 p.m. near the docked excursion boat. The Polar Plunge has become another mainstay of the Winter Games since it debuted as "Spas on Ice" in the early 2000s. Participants take a chilly and often brief dip in Iowa's deepest natural lake — though in one of the shallower sections, of course — to support the Arnolds Park/Okoboji Fire and Rescue dive team's equipment purchases. The APO crew supervises the plunge, and at least one member dons a specialized diving suit to assist anyone who may need assistance in the frigid water. The plunge participants themselves have been known to come in colorful costumes — anything from vikings and video game characters to classic television icons and other pop culture figures.

As night sets in, the public can take in a new twist on a rising favorite. The Okoboji Winter Games Kite Festival has become increasingly popular since the large-scale kites first flew over West Lake during the 2019 games, and organizers hope to put on a Night Kite Show from 6-10 p.m. Saturday. The high-flying spectacles are expected to coincide with the traditional Burning of the Greens and Fireworks Extravaganza at 6:30 p.m. in nearby Preservation Plaza.

Zankowski said she and other chamber officials enjoy seeing the annual schedule of events continue to grow each year, and she said the festive fun during Winter Games weekend is difficult to capture in just a few words.

"The way we like to describe it is watching our area come back to life in the winter," Zankowski said. "It's everything you want to enjoy in the summer, but in the winter time. It's just a really great way to escape cabin fever and see the lakes in a whole new perspective." 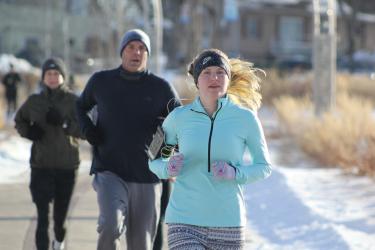 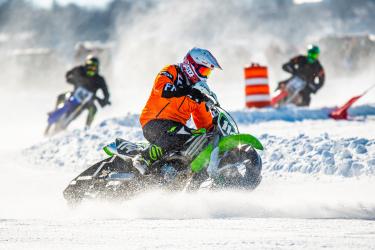 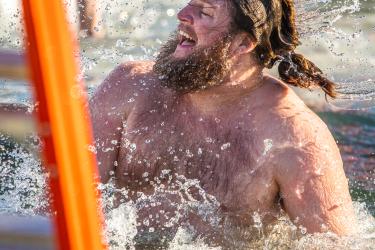 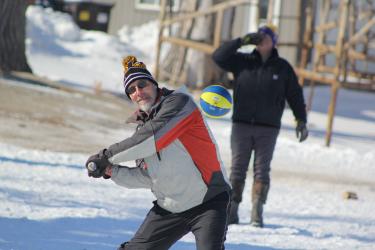 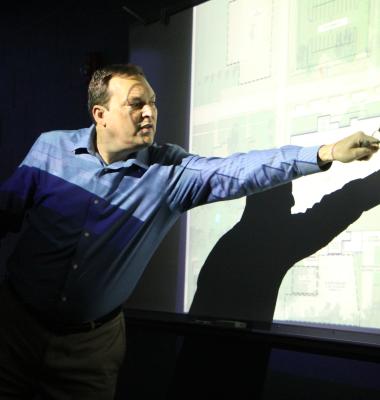 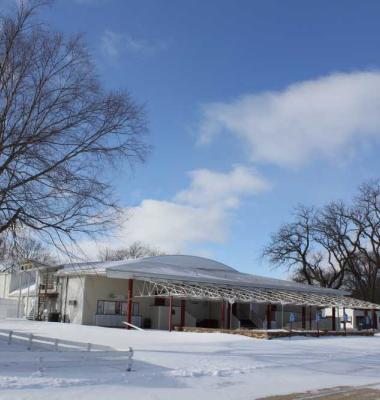 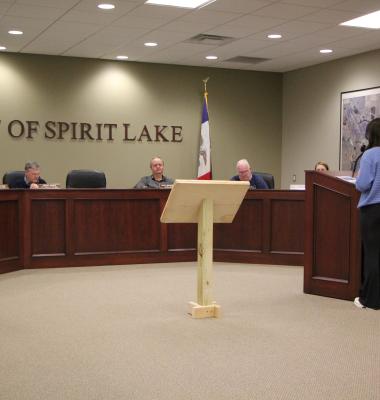 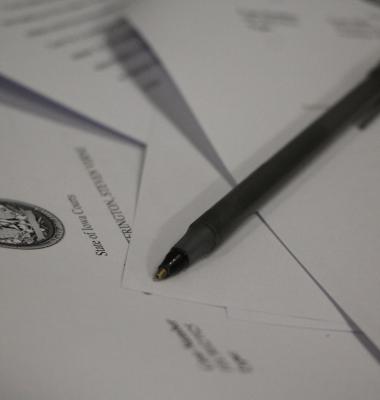 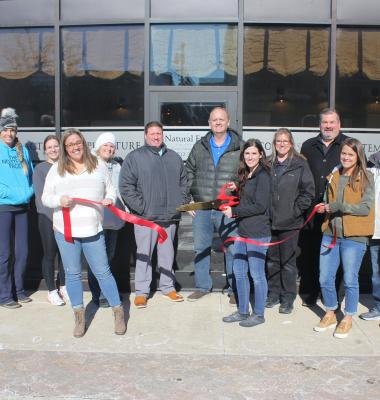