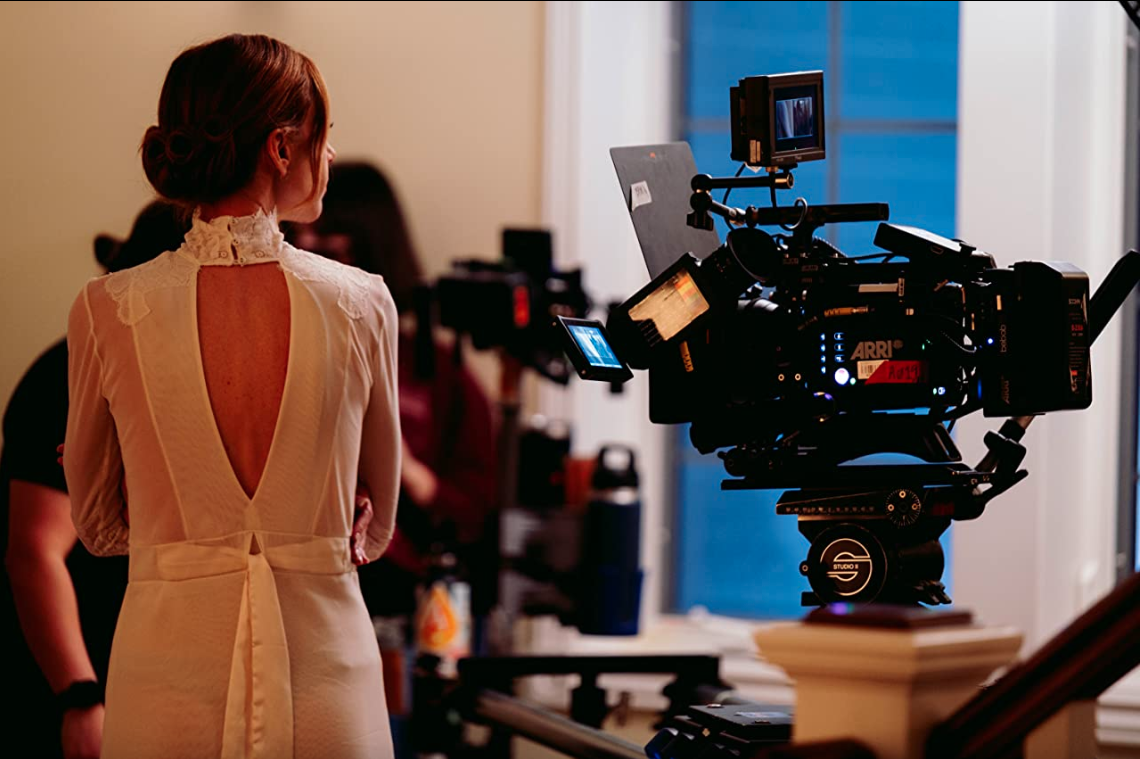 Jess Bishop plays the character Lacey in "The Willowbrook," which was filmed largely at the Oakwood Inn in Okoboji. (Photo courtesy of TFC Photography)

Okoboji alumnus Zach Koepp took a few different paths in life before becoming a film maker, but he said story telling has always been a part of his life.

Koepp has now been working professionally as a film maker for several years and filmed his latest production in the Lakes Area earlier this year. The 31-year-old screened his new thriller "The Willowbrook" at the Pearson Lakes Art Center on Nov. 9. The film premiered in October at the Silicon Beach Film Festival in Los Angeles, where it won best feature film in the audience award category.

In the film, a renowned health and wellness influencer invites one of her followers to recover from a recent overdose at her small-town manor, but soon the guest "realizes the dark world existing within the manor." Koepp called his newest work a unique spin on the thriller genre and said the film touches on the abuse of power — specifically the kind which comes when one surrenders their vulnerabilities, thoughts and self-control to another — "tossing the keys to someone else" as Koepp phrased it. He said he feels the film took a tonal risk within the genre, but he said it ultimately turned out almost exactly as he intended.

"One of the coolest reviews we got was at the Silicon Beach Film Festival — they said it's like a modern-day Addams Family that exists in a punk-rock story world," Koepp said.

And when it came to choosing a setting for his film, the far-flung local decided to come back to his old stomping grounds in the Lakes Area. Koepp said it was impossible for him to start the story from anywhere other than the foundational settings of his youth.

"Being an Iowa filmmaker, for me, is something that is a career goal, and I'm just very proud of being an Iowa native," he said. "It's something, when I'm out in Los Angeles and Hollywood, I can walk around with a badge of pride knowing I've got my roots with me, and I feel like that's something that really separates me from a lot of creatives in Hollywood."

Koepp graduated from Okoboji High School in 2008. He grew up participating in the local Future Farmers of America as a member, and archives of the Dickinson County News list him as part of the 1999 Okoboji Elementary School production of "Christmas on Candy Cane Lane" — Koepp was listed as playing one of many candy canes in the production. Koepp said he consistently thought in movie format as a child and would imagine the sort of scene that would follow his real-life experiences.

Koepp started his own small business in the early 2000s — a venture in which he still takes great pride. The then-19-year-old offered a four-acre lot called The People's Place as a space for those hoping to sell cars, boats and other vehicles by displaying them within view of the nearby Highway 71. He had completed a year at South Dakota State University at that point, and he would go on to play football for the Jackrabbits as a long snapper. Within a few years, he was doing the same for the Washington State Cougars. But Koepp said he never lost his love for storytelling, and he eventually started writing for films.

"I just gravitated toward it," Koepp said. "I knew that storytelling and movies were what I was supposed to be doing. I didn't necessarily know how, but I knew I wouldn't be able to exist without storytelling in some capacity."

Koepp said he now has several years of experience under his belt, but "The Willowbrook" — which the Okoboji grad wrote and directed — is only the second project on which he's been formally credited.

Local audiences will likely recognize a few locations in the film, such as the iconic Vick's Corner World just west of Spirit Lake. "The Willowbrook" was primarily filmed on the Baish family farm in Westport Township and at the Oakwood Inn in Okoboji. Koepp found out in December that the local bed and breakfast was available for filming, and he rapidly set about writing the script before principal photography began Feb. 8. Bridget Johnson, who owns and operates the Oakwood Inn with her husband Bill, said filming at the inn lasted about two weeks, and she said the project added some variety to the snowy Iowa winter — often the down-season for the area's hospitality and tourist-driven businesses.

"Our bed and breakfast was, we feel, the perfect location for what he wanted to accomplish with the storyline, because we had a lot of spaces that they could use for their shots," Johnson said. "It was a lot of fun, frankly, working with Zach and the crew."

Johnson said there were several conversations ahead of time regarding the film's direction, and in the end the local innkeepers were well pleased with how the property was treated during production. Johnson said they feel "The Willowbrook" fit nicely into their plans for the inn's reputation.

"It doesn't necessarily always have to be a 'Hallmark' movie that's shot at a bed and breakfast," Johnson said. "Sometimes you can have some other, very interesting films shot here as well."

And a lot of work had to be done to prepare for filming — and in a relatively short period of time. Koepp said fellow local Krista Kolegraff, who plays the role of Winnie in the film, was heavily involved in arranging aspects of the production. Koepp's fiancé Jessica Bishop, who plays the role of Lacey, helped fill out the cast by referring a number of friends in the acting business.

A good deal of local support helped "The Willowbrook" along as well, according to Koepp. He said Lakes Area residents shuttled the out-of-town cast and crew from place to place and stood out in the snow to be sure the crew could access a location for filming. A number of locations, including Historic Arnolds Park Amusement Park, let the crew film on their property free of charge, he said — though the amusement park scene ended up on the cutting room floor. Koepp was very thankful for all the local support during the project.

"When we needed something moved, we had locals rolling up their sleeves — or I guess, putting on an extra pair of gloves because it was so cold — and helping us do it," Koepp said.

But when it came time for last week's local debut, the Okoboji alum wasn't sure how the Lakes Area audience would respond to the film. Koepp said he was worried a fair number in the audience might not be fans of the thriller genre and simply be there to support his work. He hoped they could at least make it through the entire film — running time 1 hour and 13 minutes — but the night turned out better than expected.

"Whether people were a fan of the genre or not, they really responded well to it," Koepp said, adding he has since received messages from viewers who say the various characters are stuck in the forefront of their minds.

Koepp said it made for one of the best nights he's had in his career so far.

"Being able to screen that movie for my people, and the fact that they rallied around me — there's no greater feeling, especially in the movie industry where it's so much bigger than one person," Koepp said, noting all the factors that come into play between script and screen. "It's so humbling that you're just left with a gratitude that can never be forgotten."