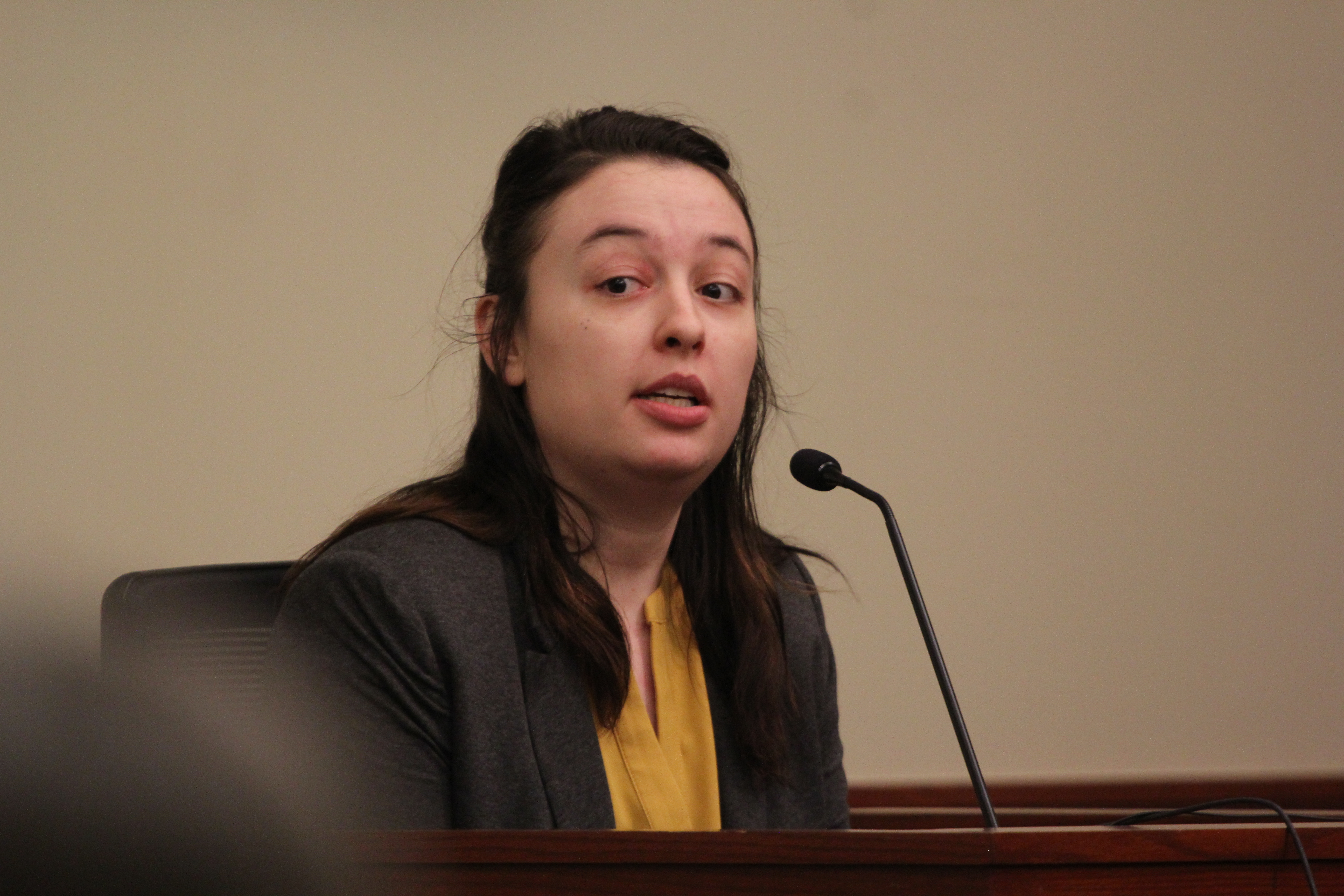 Allison Decker took the stand during her bench trial last month. She was found guilty Tuesday of first-degree murder, third-degree theft and conspiracy to commit third-degree theft. Sentencing will be held at a later date. (File photo)

A five-day bench trial was held in the case last month and Iowa Third Judicial District Court Judge Shayne Mayer read her verdict in court Tuesday afternoon. The judge found Decker guilty of first-degree murder, third-degree theft and conspiracy to commit third-degree theft. The court has yet to set a date for Decker's sentencing in the case.

Bastman's family found the former Marine's body the morning of Dec. 22, 2020, in the basement of the Lake Park home she shared with her sister. Investigators said Bastman was strangled with a wide, flexible object such as a belt — medical examiners ruled out suicide as a cause of death. A number of items were also found to be missing from Bastman's home, as was a car rented in her name. Several of the stolen items – some with significant sentimental value – were later recovered from a Sioux City house in which investigators said Decker was residing.

Decker and her co-defendant, 25-year-old Justice Ray Berntson, were arrested in July of 2021 and charged in the case.

Berntson testified during Decker's trial last month as part of a plea agreement with state prosecutors. The 25-year-old pleaded guilty in December to the lesser charge of attempted murder in exchange for his truthful testimony in Decker's case.

Berntson said he and Decker arrived at Bastman's home early on Dec. 21, 2020, and the three of them used methamphetamine in the basement of the house. According to Berntson, Bastman's then 3-year-old daughter entered the basement while drugs were being consumed, sparking an argument which became physical. Berntson testified Decker asked him to give her a looped belt Berntson had used to inject drugs into his arm. Berntson said he handed Decker the belt and headed upstairs while Bastman was strangled.

"Berntson did not seem remorseful or particularly bothered by his role in the murder," the judge's ruling said. "Nor does the court entirely believe Berntson's convenient exit from the basement as the act of strangulation was completed. However, the court finds Berntson's testimony as to Decker's involvement credible, which the court finds was either as a principle or aider and abettor."

Decker contended at trial that she never entered the basement and was unaware at that time Bastman had been killed.

Evidence showed Bastman had previously provided local law enforcement with names of possible drug offenders. One of the names given to police was Jay R. Berns — a pseudonym of Berntson's. Decker claimed at trial that Bastman confided in her about the names given to police. Decker claimed Bertnson became angry after she herself asked him about the list in passing, and indicated Berntsen may have then killed Bastman.

However, Decker communicated with several parties regarding the murder after it was made public, and the judge noted none of the exchanges in evidence mention the list of names as possible motive for murder.

"Instead, the motive communicated to others by Decker, the only person who could have known on the date of the homicide that Berntson knew of Angel's disclosure, is anger of the presence of (the child) while methamphetamine is being used," the judge wrote.

Berntson himself was sentenced a few hours before the judge's verdict was read in Decker's case.

The theft and conspiracy charges filed against Berntson were dismissed as part of his plea deal with the state, but he still faces up to 25 years in prison — 17.5 of which are mandatory before he can become eligible for parole or work release.

Berntson must pay $150,000 in damages. Court filings show Berntson will not have to pay court costs and attorney fees, but he will be required to also pay $7,500 to the Crime Victims Compensation Fund — other court filings show Bastman's family sought an equal amount in Berntson's case to cover funeral expenses.

Berntson apologized in court Tuesday morning, saying he was sorry for his role in Bastman's murder.

"It's going to stick with me for the rest of my life," Berntson said.

At least two of Bastman's family members told the court they feel they cannot forgive Berntson and believe he deserved the death penalty.

"I will never forgive you," she told Berntson while reading her victim impact statement in court. "You have stolen one of my biggest reasons for getting up in the morning."

Bastman's sister Sylvia Holland said she felt unsafe near the home she shared with her sister and ultimately sold the house.

"I can't wear makeup and look in the mirror anymore because all I see is her," Holland said, before adding she hopes a piece of Berntson never truly leaves prison.

The 25-year-old's sentence was to begin immediately. He is also to be given credit for time served in jail so far. Berntson has been in custody at the Dickinson County Jail since Aug. 4, 2021.